Skip to content
Posted on May 6, 2019 by Garrett Zafuto

© Header Image Courtesy of the NHL

The Danger of Accomplishing Your Goals: Maintaining Momentum From Your Busy Junk Removal Season

Here in the Raleigh, North Carolina, area we are having hockey fever. No, we aren’t a traditional hockey town, but this area has proven that when the Carolina Hurricanes play well, our fans respond! During playoffs, the PNC Arena where the team plays becomes the loudest house in the NHL. The team just swept the New York Islanders and unexpectedly made it to the Eastern Conference Finals. They now have ten days of rest.

One mistake that I’ve been guilty of making—and many business owners have made—is putting together a few successful weeks or months and believing that business is going to stay like that. Business owners like me get on a high and go out and purchase things they don’t really need. They might start coming into work just a bit later. They start leaving a bit earlier. They give their team a little bit too much leash without ensuring things are being done correctly. And a little at a time, sales go down, profits go down, team morale goes down, customer satisfaction goes down, and the wheels begin to come off. Many business owners don’t realize the problem is as serious as it is until one of the wheels actually falls off. At that point they must rebuild, after wasting a lot of time getting to that point. Some of them won’t be able to recover.

The Hurricanes haven’t reached their main goal yet, which is winning the Stanley Cup for the second time. But often times, the business owner in the above scenario hasn’t hit their main goal yet, either. They feel like things are going well and reaching their goal is inevitable. When you have momentum like that and things go well, you need to keep increasing your efforts. The Hurricanes may be allowed to take a rest right now, but junk removal business owners like you can’t take a break. If you settle, you will lose momentum which you may never recover. 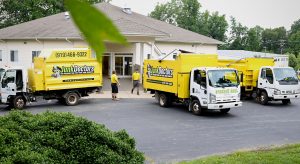 In the junk removal business, the most common time for an owner to face this problem is during the busy season that runs from May through the end of October. If the owner has done a great job getting crews hired, purchasing trucks, having others answer the phone (the JRA Call Center, possibly), marketing, and training a Supervisor or two, then the business doesn’t completely rely on the owner, especially during the busy junk removal season. The owner is making more money than ever before with his junk removal franchise and he thinks it’s gonna keep going like this. This is the time to further expand, not retract! Remember, all of those crews, trucks, and support staff you have hired have to get paid during the slow season as well. Get as much as you can now to get you through the winter and do business with as many people as possible when you are busy to increase the repeat business you might get through the slow season.

One common mistake junk removal business owners make is not continually purchasing and upgrading your trucks. This is a mistake I am now in the midst of fixing, myself. We have an aging fleet of trucks. Last year, I decided to try to go one year without buying a truck in order to maximize profits. We had bought several vehicles and pieces of equipment the prior year, so I had some carryover depreciation I could take advantage of for tax year 2018. Unfortunately, we had a truck get totaled in 2019. Now, we’ve placed orders on two trucks, just bought a third used one, and will order two more soon. If you are getting new vehicles, these bodies aren’t just sitting around (not yet, anyway, hint, hint). We used to be able to get bodies built in about six weeks. When we went to order some in February, we were told 12 weeks. As of May 5th, 2019 we have yet to see one of our bodies. So, we’ve been running our old vehicles ragged and having to defer some maintenance because we don’t have the backup vehicles in place. This reduces employee morale, doesn’t set a great appearance standard for our customers, and increases maintenance cost in the long haul. Always make sure your prices are high enough that you can add and replace equipment regularly.

Ask Yourself What’s Next For Your Junk Removal Business

The Hurricanes will take back to the ice to try and win a Stanley Cup. If they do win that Cup, there will certainly be some celebrating. But the momentum can’t stop there. The players on that team will then need to ask themselves, “what’s next?” Michael Jordan was famous for celebrating a big win then shortly getting back to training in order to win the next title. Once a major goal has been accomplished, you should give yourself permission to celebrate, but do so quickly. Then set another large goal that will be difficult to attain and get right back to it.

Once you have momentum do your very best not to lose it. If you do, then you might never attain that level of success again.

Junk Removal Business Doubles Revenue with JRA Google Ads Want fast results? Google Ads for junk removal businesses has the potential to double revenue in no time at all. Just take a look at Lightning Bay Junk Removal, a business that jumped from $6,500 a month to $14,000 a month in revenue after hiring Junk […]

How to Make A Million Dollars with Your Junk Removal Business

How to Make a Million Dollars with Your Junk Removal Business You can make a million dollars with junk removal! We already know the formula for success, and we’re willing to share it with you.  JRA’s Blueprint to $1 Million will show you how to build a junk removal business that generates 1 million dollars […]

JRA Client’s SEO and Website Gets an A+ Rating from Google Rep A good SEO ranking for junk removal can make all the difference. Just ask John LaBarge, the owner of a highly successful business, JP’s Junk Removal & Power Washing. Imagine his smile when his Google rep reviewed his SEO and Web and gave […]