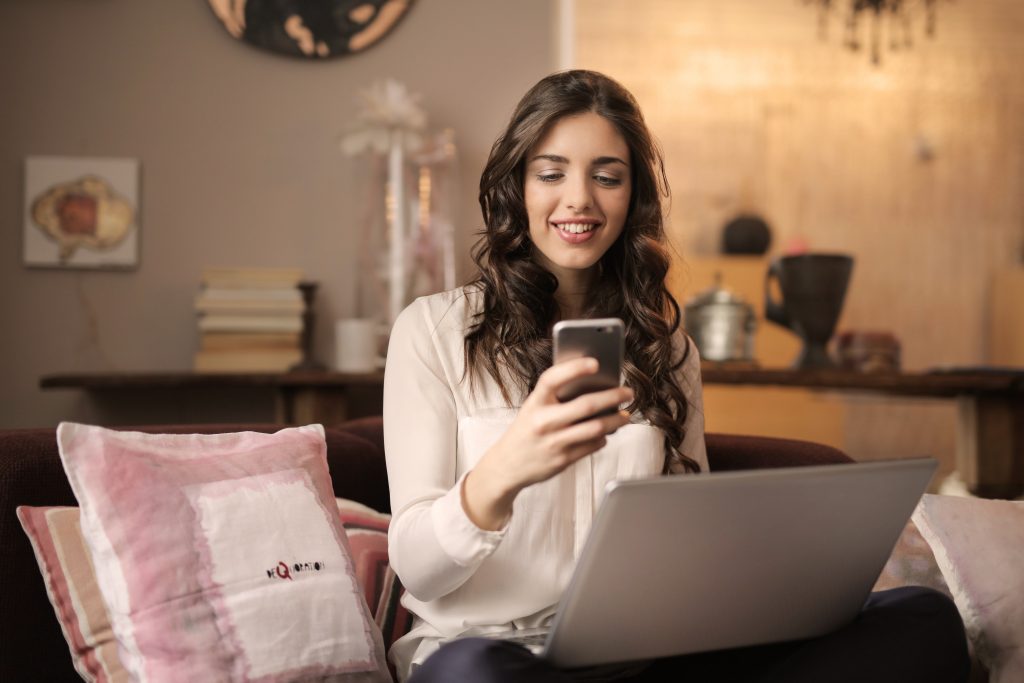 “Home Advisor.” Say those two words in a room full of junk removal business owners and other home service business owners, and you are going to get a wide range of reactions. Many people will say, “They aren’t really for me.” Some will make it very clear their feelings as they list off a list of reasons that Home Advisor sucks, with some very colorful language inserted throughout. Then there will be a few — likely just a small percentage that is happy with Home Advisor. There is a good chance they won’t say anything. That is because that group understands how to work Home Advisor. That group understands that Home Advisor like most forms of advertising if done right, done often enough, and for a long enough period, will shower profits on their company.

Home Advisor, like all but one topic covered in this series on advertising, is a long-term play. If there is one thing, we must make it clear when it comes to advertising your junk removal business or pretty much any home service: you have to be in it for the long term! Listen, you have not just created the hottest and newest iPhone app. You have not created some piece of revolutionary technology. You have gone into a business that has been around for decades. The only way you are going to make it is through hard work, smart work, patience, and investing in getting known.

Home Advisor is an online listing service for service providers. It is free for customers to join and leave reviews. Home Advisor was founded in 1998 as Service Magic, and it operated under that name through 2012. As Service Magic it had developed a pretty nasty reputation for pushy salespeople who promised a service that could not be delivered. When Junk Doctors first tried Service Magic in 2011, most of the leads we got were bad. There would be a disconnected phone number, wrong phone number, non-existent email address, etc. When requested a refund on the bad lead, they would rarely grant it, and when you tried to pull out of your service agreement, they would often not cancel it even though they said they did. It was poor service, and we ran away as quick as we could.

Once they brought on new CEO Chris Terril in 2011 things began to change for the better. They changed to Home Advisor, likely because Service Magic had accumulated such a poor reputation, and began to fix many of the issues that plagued the service. Due to the bad experience we had when we first tried the service we simply observed at a distance for several years, and did not start back with Home Advisor until 2016. Luckily, we had found the service had gotten much better.

Most leads we get now at least have accurate contact info. Home Advisor uses a forwarding number instead of simply listing the phone number like before. I’m not certain, but I am guessing they test the numbers to make sure they are accurate as we no longer get bad phone numbers like before. Though the salespeople are still pushy, they are much better trained at not infuriating you. They do their job well, staying in touch, following up, and will eventually get you to purchase the service, most likely. Whereas before they would piss you off so bad that there was no way you were ever going to use their service.

There are two main ways consumers use Home Advisor. Those that understand how to get around the site know that you can view a list of contractors by category. With this search, you can view ratings and reviews of the contractor. Home Advisor makes this difficult to find because they make much less money off of it. Home Advisor makes the majority of their money by selling leads. A consumer goes through a series of questions including their address and what they are looking to get done, and a time frame. Once they are finished filling out the list of questions their info is blasted out to several service providers. It is then up to the Service Providers to close the deal!

Closing the deal is the key to Home Advisor. The people who complain about the service are the ones who cannot close the deal down.  This does require a bit of salesmanship. We interviewed Russ Burry, owner of A+ Junk Removal and A+ Gutter Cleaning out of Rochester, New York. You can visit his site at http://www.rochesternyjunkremoval.com/. Russ has been using Home Advisor for many years between his two businesses. He, like us, finds that he closes about 25 percent of the leads he gets. Russ says you have to call back within one minute of receiving the lead. He claims that he doesn’t even listen to the phone call from Home Advisor. Instead, go immediately to the notification you received in your app and dial out. Just taking the time to listen to the call you get from Home Advisor could allow your competitor to call first. Russ turns his leads off at any time he won’t be immediately able to respond to the lead. Even if he is going to take a nap, he turns off the phone. Russ makes sure he requests refunds on bad leads through the app, and he will spend about 45 minutes a month talking with HA getting them to refund jobs that the app didn’t automatically grant. Often he will go to the cancellation department, and they will then issue refunds on those leads. Russ says, “Home Advisor sucks. But it is a necessity”. We tend to agree.

Tips to close the sale with Home Advisor include calling the customer immediately, having a pre-planned script for different scenarios, and understand common objections and how to handle them. Also, if the customer does not pick up the phone you should immediately text them and email them AND call them back an hour or two later. You might piss off someone every so often. But you will book jobs too.

One of the other key things that Russ mentioned above to your profitability with Home Advisor is to request refunds whenever you get a bad lead. That doesn’t mean when you get a lead but don’t get the job. That means when it is a service you don’t offer, outside of your service area, etc. You can request the refund on the phone. But you will frequently have to call them up about once a month or once a week and talk to people. Threaten to cancel, and much like the cable company, they will come around.

Home Advisor does do a few things that are a bit deceptive but are within their terms of service that you agree too. They will create online listings with your company name and will list a phone number for Home Advisor instead of your actual phone number. This is deceptive since some of the leads they get are not from people going to the Home Advisor website, but instead finding you on some other directory. However they did get you on a directory you were not on, and you would have otherwise not gotten connected to that customer without the listing.

TIPS TO BE SUCCESSFUL WITH HOME ADVISOR 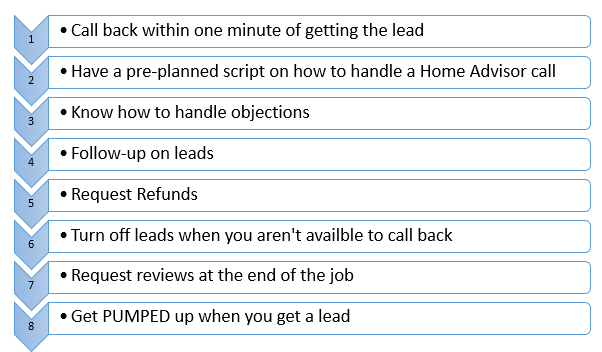 Home Advisor, if done correctly, will bring you some short-term profits. You will pay around $20 a lead on average, and convert about one out of every four. So you pay about $80 per job. That is similar to what we see from Google Pay Per Click as well. Like PPC, that cuts into your short-term profit. However, you must look at the long-term value of each customer. If you do a great job and have a great customer follow-up system in place, they will use you again, refer you to their friends, and leave a review online. That means the next time they use you they won’t be going through Home Advisor. They will go straight to you. The lifetime value of that customer between business they will directly do with you and business you get because of referrals and reviews will be thousands upon thousands of dollars. Not bad for $80!

The final tip I will provide about Home Advisor is to train yourself to get pumped up when a Home Advisor job comes in. Know that the lead you are getting is going to be turned into a job and you are going to make money. Train yourself to get excited when that lead comes in and carry that enthusiasm into the call with the customer. The customer can’t help but book when you call immediately and have such as sunny disposition.

Lee Godbold is the co-founder of Junk Doctors, a $2 Million a year junk removal business in North Carolina, and Junk Removal Authority, the junk removal industry’s premier provider of information and support.